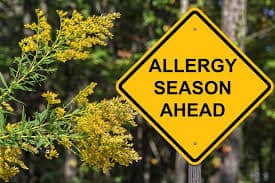 I hope you’re all having a productive week. I’m finding it hard to believe that spring is here with the thunderstorms we’ve recently had!! And it’s been so windy! A nightmare for those of you suffering from allergies! I’ve had a reader email me asking which allergy tablets are the best and carrying on from my email from last week, I thought I would cover this topic.

As I said last week the best treatment for allergies is to avoid the thing that you know to be causing the allergy (e.g. pollen, fur etc.) but as you can imagine this is easier said than done! It’s not practical to lock your self indoors to avoid pollen drifting in the wind!!

This brings me to the variety of antihistamine tablets available in the pharmacy. It can be overwhelming to decide which is the best for you or your family – making the correct choice is crucial to relieve the suffering of allergies – and your wallet ?

But first I just wanted to cover how an antihistamine tablet works to combat allergies.

Allergy symptoms occur when your body wrongly recognises something (such as pollen) as a threat and sends chemicals such as histamine to deal with the perceived intruders.

Histamine can cause the symptoms that you associate with allergic reactions such as itchiness, runny nose and watery eyes. Antihistamine tablets block histamine to reduce allergy symptoms – however, they do not stop allergies from occurring completely as there are a variety of agents involved in the allergy process.

There are two types of antihistamines – sedating and non-sedating.

The most common ones that you can buy direct from a pharmacy are the non-sedating ones. Don’t be fooled by their name though – although most people that take them are fine – some people do find that they can make them drowsy! I always recommend taking a dose when you know that you will be at home and see how it affects you.

Antihistamines are generally a once-daily tablet which makes it convenient to take – especially if you have more than one symptom such as watery eyes and runny nose.

“But which one is the best to treat my allergy symptoms?!” Is a question I get all the time from patients.

The truth is that it is often a trial and error process to determine which is most effective for you.

Loratadine and cetirizine are often a good place to start (some do find cetirizine can cause drowsiness though). They work within 1-2 hours and a best taken regularly to prevent the symptoms (rather than as treatment once you have allergies).

Some people alternate between the two on a monthly basis as they find their body can build a tolerance to them after taking it for a while.

If you are not getting any relief from the above newer agents such as fexofenadine (Telfast) can be trialled. The dose can be increased depending on the severity of your symptoms.

Lastly sedating antihistamines can be taken at night (particularly if your symptoms prevent you from sleeping) but I wouldn’t recommend these routinely.

As always, I suggest you talk to one of our team at the pharmacy or your GP before starting a new medicine as their may be interactions with your current medicines or conditions. We’re always happy to help go through treatment options to determine which product is right for you to prevent wasting time and money on something that may not suit.