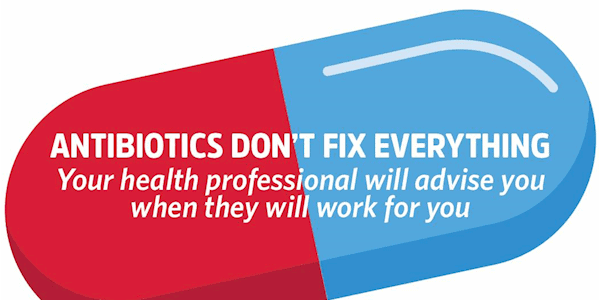 This week is antibiotic awareness week and I was reading an article on “Stuff” last night about how New Zealand antibiotic use is amongst the highest in the world. I couldn’t agree more because antibiotics are probably one of the most commonly prescribed medicines that my team and I come across daily. The amount of antibiotics being used over the years has increased significantly. According to the article, community antibiotic use rose nearly 50% between 2006 and 2014. What’s alarming is that antibiotic resistance was once largely limited to infections acquired in hospitals, but in recent years it has increasingly become a problem in the community. This could explain why I’ve noticed the number of repeated course or multiple courses of antibiotics being dispensed for the same infection on the rise.

Just like climate change, we humans are doing that to ourselves. However, what’s disturbing is that the amount of coverage on the mainstream media is nothing compared to climate change even though the era of antibiotics is coming to a close, and the post-antibiotic apocalypse is within sight. As Britain’s chief medical officer has said in an interview that antibiotic resistance could kill us before the climate change dose if we don’t do anything about it.

Throughout history, human beings have the tremendous ability turn things around quickly when we are in grave danger. However, we are pretty hopeless at solving a problem that is growing very slowly.

On the other hand, acquired resistance is a result of genetic mutation either picking up, transfer or sharing of genes from or with another bacterium.

Now, some of you might ask me: – What trigger antibiotic resistance in bacteria?

That is an excellent question. Let me explain using business competition as an example. Being a bacteria is like running a business. There is an intense amount of competition between different businesses within the same field. Competition drives other businesses (bacteria) to develop new ideas (survival mechanisms) to make them stand out from the rest. Some business (bacteria) even develop their unique point of difference (antibiotic compounds) that could eliminate surrounding competition (bacteria) and put them out of business, hence increasing the business’s chance of survival. As a matter of fact, this was the whole basis of how penicillin was discovered! Some business (bacteria) may have the resilience and learn from other businesses ‘ failures (picking up resistance genes from another bacterium) and have evolved to adapt to the new environment. In other words, they are becoming resistant to other competition’s strategies (antibiotic).

· Prescribing antibiotics in situations that are not necessary

· Overuse of antibiotics in livestock farming

· Prolong courses of treatment with antibiotics

All those situations may put pressure on resistant bacteria to overtake the population and make them more difficult to treat.

This may lead to another question – Shall I stop antibiotics when I feel much better, or is it best to finish the course?

Always remember, a short antibiotic course might eliminate bacteria that are susceptible to the drug. However, it takes a full course also to eradicate those bacteria that are only partially resistant. In other words, if you stop your antibiotic too soon, you may un-intentionally giving partially resistance bacteria a chance to shine, which can be a problem to eliminate further down the track.

Antibiotic resistance is an important health problem because if not addressed properly, it could prolong your infection, make you more likely to have complications from the infection, and possibly pass your infection to other people.

So what can we do to stop or slow down antibiotic resistance?

To be perfectly honest with you all, it is not possible to eliminate the development of resistance. However, what we could do is to fight smarter. We could utilise strategies like:

· Reducing the use of antibiotics in animal farming

From your perspective, things that we could all do is by focusing on preventing the spread of infections by improving personal and family hygiene.

· Wash your hands often, with soap, for 20 seconds, and dry them well

· Stay home if you are unwell

It is important to remember; antibiotics should only be used when advised by your doctor for your current illness. Using antibiotics when they are not needed or taking the wrong antibiotic exposes bacteria to antibiotics unnecessarily, which encourages resistance.

Another thing to keep in mind is that just like food, antibiotics go off. Keeping leftover antibiotics may lead you to take expired medications, which means they may not work when you need them or even make you feel ill.

The risk of sharing antibiotics with others is also a contributing factor in promoting antibiotic resistance and is ones that I see people frequently do. The antibiotic you were prescribed may not work for your family member’s illness because, first of all, they may not need it at all. Also, they may need a different type or dose of antibiotics for their condition.

Lastly, I get asked quite frequently by many of my patients about whether it is okay to pour antibiotics down the toilet or sink. The simple answer is NO! There is always a risk that the antibiotics poured down the sink or flushed down the toilet may pass through treatment systems and enter rivers, lakes and even drinking water supplies. Antibiotics that get into the environment may drive bacteria to become more resistant.

This week we are running an “Antibiotic amnesty” campaign to promote the safe use and disposal of antibiotics. If you have any unused or expired antibiotics sitting in your medicines cabinet, then I would strongly urge you to bring it to us for safe disposal:)

The bottom line is that we all can do our part on preventing the progressing of antibiotic resistance by not only following the above mentioned but also always follow your doctor or pharmacist’s advice on how to take any antibiotics prescribed to you.

Once again, my team and I are always here if anyone has any questions about any antibiotics prescribed to you.

In much health and happiness,