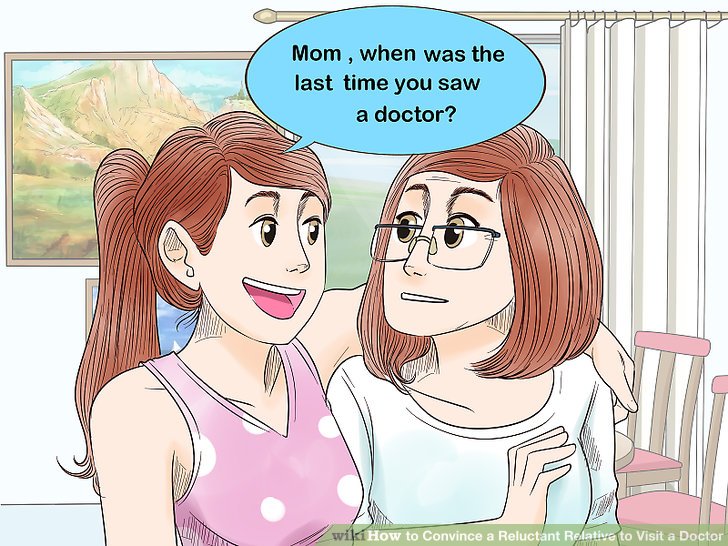 Strangely enough, people can be quite stubborn when their beliefs and emotions clash with the truth. How many of you have tried to convince someone you love to seek medication attention when they need support and help from a health professional? It’s something that I have to deal with on a daily basis at work – either in helping family members convince their stubborn parents or trying to help my patients realise that they need to seek help from their GP.

Whether it is uncontrolled diabetes, consistently high blood pressure despite taking medication, a fungal infection in their toenails that hasn’t cleared in 2 years or having signs of depression that are not managed by adopting a positive attitude and resilience. These are just the tip of an iceberg of health issues that could easily be managed if it weren’t because of our stubbornness.

The reasons most people are reluctant to seek help always revolve around bad communication between them and their healthcare professionals; or personal perceptions, ill-informed understanding of medicines and unrealistic expectations of what they can do to improve their health without the help of medicine.

Previous bad experiences with a healthcare professional, worrying about the potential harm and side effects that they might experience when starting medication, insisting on lifestyle interventions rather than medication, and being reluctant to take medicines for the rest of their lives are just some of the many excuses that stop people from seeking medical help.

The following points may aid you in convincing them to see a health professional:

There are several strategies that I’ve learnt on the job over my experience as a front-line pharmacist that has helped me to persuade my patients to seek medical interventions. One thing that I’ve come to terms with is that it’s almost impossible to change someone’s behaviour by telling them you are right and they are wrong.

In most cases, you simply cannot talk logic to people with strong beliefs as their actions are powerfully governed by their emotions rather than rational thinking. If you start the conversation by telling them they’re wrong, you’ll only make them defensive because it feels like a personal attack on their intellect, causing them to dig their heels in. So, in these situations, rather than pushing your own argument, it’s best to be tentative and listen, listen and listen. Paying attention to what they have to say, understanding their ideology as to why they have such beliefs. They may be extrapolating correct points so far that they are no longer right – acknowledge them, before guiding them to realise they’re no longer completely right is probably the best way to make your loved one agree with you that they need help.

The problem with trying to connect with your loved ones or convince them of a different perspective is that we have a tendency to assume that they aren’t aware of what is and isn’t the right thing to do. The truth is that people are generally smart enough to know what’s right and wrong unless they are a psychopath. So, telling people what to do and how to do things right is not usually well taken and almost every time would lead to a bitter ending.

Take smoking for an instance, everyone knows that smoking is bad and is the major contributor to lung cancer. So, why do many people still smoke despite knowing that it’s a harmful habit? The answer to this is simple – the pleasure they get from smoking is far greater than the truth. The ugly truth of how smoking kills.

Rather than stating the obvious facts, truths, and consequences of their behaviour, it is much more effective to guide them to their own enlightenment instead. What I mean by this is to make it seem like their own idea in seeking help.

The way to do this is to help them understand “why” they need to seek help in the first place rather than telling them they need help.

People usually have strong attachments to their opinions. So, to change their thoughts about seeking help requires you to address their emotional attachment to what they believe.

Let’s go back to the smoking example, to many people, health is the politically correct reason but usually not the deal-breaker and motivator when it comes to quitting smoking. If health is the priority then everyone would have quit by now. By helping your loved one to dig deeper into finding their ultimate reason for quitting, and acknowledge their reasons for maintaining the status quo – can not only help them see that there is a need to do something about it but most importantly of all, enable the change to come from within.

This approach works well because you’re giving someone you care about the chance to lower their guard and permission to change their mind without fear of it making a fool of themselves.

By acknowledging their concerns and reasons for not seeking help you can increase the chances of convincing themselves to get the help they need. For instance, the motivating factor is beyond avoiding lung cancer but rather focusing on the end goal of being around to see the grandkids.

The next time you want to get your stubborn loved one to seek medical help, follow the tips above, make your case, and guide them to their own enlightenment and help them reach the conclusion for themselves, not because you told them to but because they finally realise that there is a need to.

To a more persuasive you,