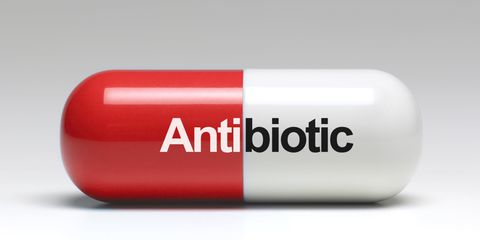 Every year, your family faces its’ share of colds, sore throats, and stuffy noses. This year is no different. In fact, after seeing the number of antibiotics being prescribed so far, I am sure that this winter is one of the worse winters I’ve seen in recent years. So many of my patients and customers are getting sick.

One of the questions I always ask parents is: when your child has a cold and you bring them to the doctor, do you automatically expect a prescription for antibiotics?

From the number of parents, I’ve asked in the past, many of them do. And they’re surprised or maybe even frustrated if they leave the surgery empty-handed. I mean, after all, who doesn’t want their little one to get well as quickly as possible? But from a pharmacist’s perspective, I think your doctor could be doing you and your child a favour by not giving them a prescription.

Symptoms from a common cold such as sore ears and throat, blocked nose and cough are usually caused by viral infections and antibiotic treatment is not considered appropriate. In some cases, there may be bacterial infection present but the majority of infections will resolve naturally.

However, there will always be people who do need antibiotics. For instance, people with increased risk of developing complications such as young infants, frail elderly people and those who have long term conditions such as diabetes, heart, lung or liver disease.

I believe that the most important treatment for winter illnesses is effective communication. Everyone should leave the consultation (either with a doctor or a pharmacist) understanding what illness they are likely to have, how long their symptoms should last, what they should do to manage their symptoms and when to seek a further assessment.

When the first antibiotic was developed in the 1940s, it was a miracle. Humans could finally gain some grounds in curing some illnesses that were once considered deadly. However, what we didn’t realise at the time was that we started a tough and never-ending battle against the ever-changing smart bacteria.

Now, before we can answer the question of whether antibiotics do more harm than good if you don’t have an infection, it is important for you to understand how antibiotics work. There are 2 major types of germs that can make people sick: bacteria and viruses.

Bacteria – are living organisms found everywhere. Although most bacteria are harmful and can cause illnesses, some are beneficial. For example, lactobacillus lives in the intestine and helps digest food.

On the other hand, viruses cannot exist on their own, they must invade other living cells (our body) to grow and cause harm. Antibiotics simply do not work against viruses.

Taking antibiotics for common colds or the flu not only won’t work, but It can potentially cause more harm than good. The following are the reasons why antibiotics should not be used when don’t have an infection:

1) Excessive use of antibiotics inappropriately can cause bacteria to mutate so antibiotics no longer can work against them (antibiotic resistance). This means that bacteria that were once highly responsive to antibiotics have become resistant.

2) Antibiotics are not smart enough to know what is good or bad bacteria. Hence, it can wipe out the good bacteria that help keep the body healthy.

However, if you or your child have an infection and your doctor prescribed you with a course of antibiotics, it is crucial to take the full amount prescribed and talk to one of our pharmacists to make sure the dose is correct. It is important to understand that antibiotics take time to work, so don’t expect your child to feel better after the first dose. It may take 1 to 2 days to feel better.

One piece of advice I always give to parents is to remember to give your child a course of probiotics with the antibiotic course. This will prevent your child’s good bacteria in their gut from dropping to a critical level. And what’s important is to carry on the probiotic course for at least 2 to 3 weeks after finishing the antibiotics to re-populate the gut with good bacteria.

Once again, if you have any questions about antibiotics, please do not hesitate to contact me personally or one of our team.